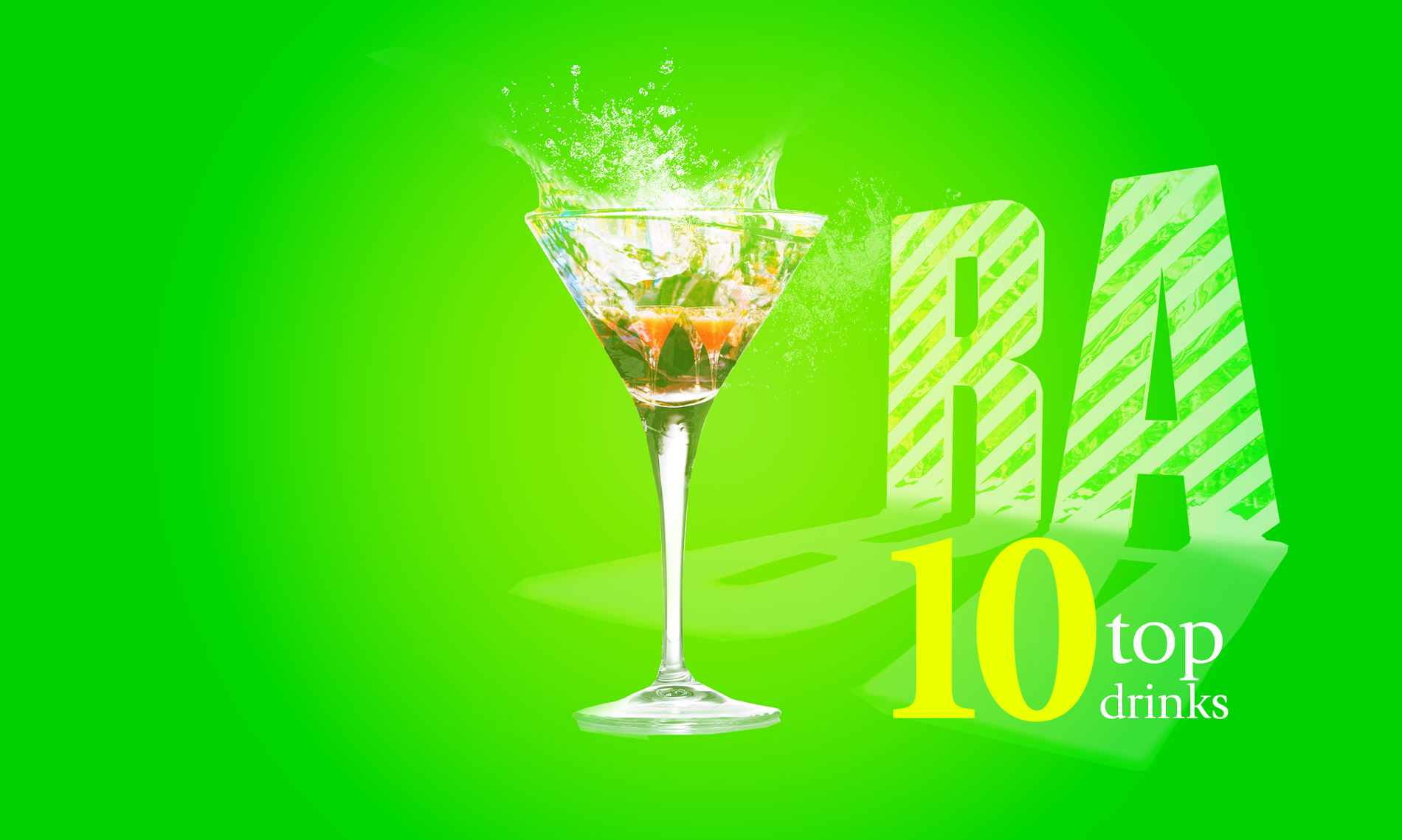 The Top Ten RA Summer Cocktails & how they are made

With our 11th consecutive Royal Academy of Arts Summer Exhibition Preview Party coming up we wanted to share our top ten favourite drink recipes from our first decade at the RA. Since 2008 we have created – nay, curated (it is the SEPP, after all) – 70-odd unique DrinksFusion potions that over the years adds up to 16,000+ drinks.

And very special drinks they have been.

Thanks to the support from our friends at Amathus drinks we have had the privilege to work with some outstanding artisan craft products over the years, a special thanks to producers like Spirit of Hven, Van Wees Distillery, Alipus Mezcal Joseph Cartron, Marolo, and Château de Laubade

Read on and satisfy your inner drinks geek! 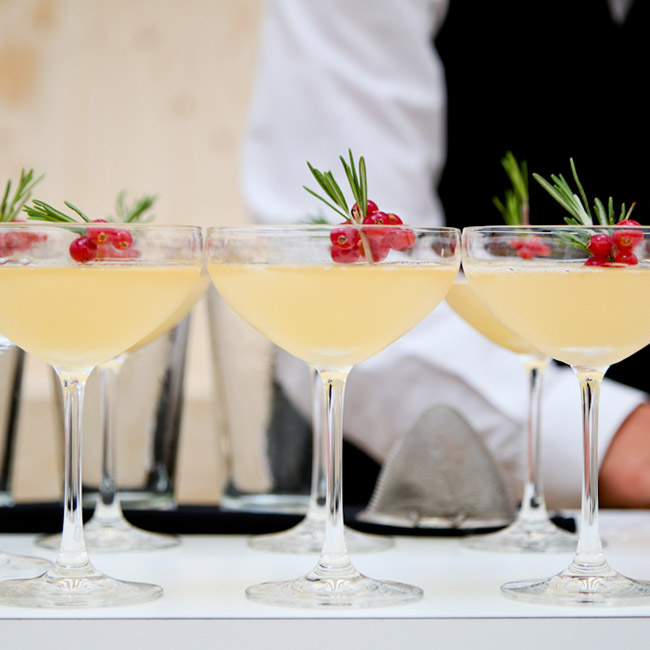 Linie aquavit original from Norway shaken with Lapponia Finnish seabuckthorn liqueur, a touch of Cálem white and dry port and fresh lemon, seasoned with a hint of peat and served straight up.

Served back in 2014 this refreshing tipple took its inspiration from the coastal lines of the North Sea, full of character and simple to make. 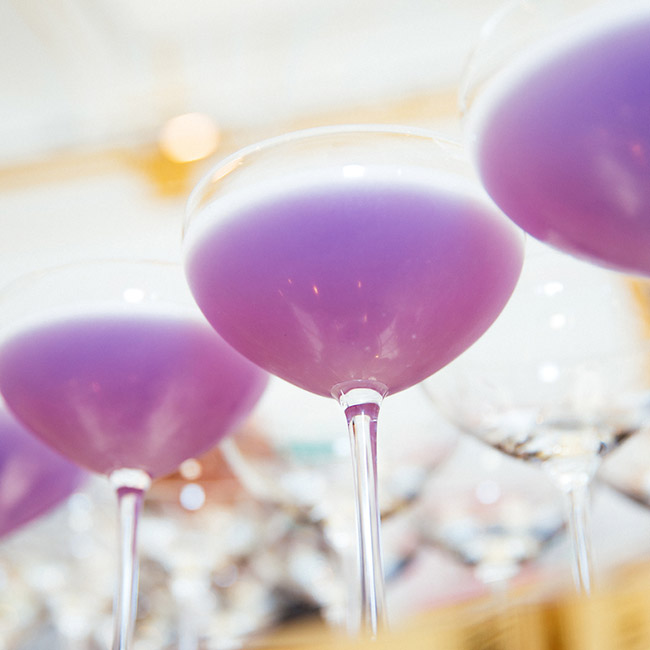 A take on the classic “White Lady” this was a very colourful yet simple and elegant drink, served in 2017

no 8: Citrus Comet (2015).
The Summer of Colour – with flavours of South America and Southeast Asia

Created for the “Summer of Colour” theme in 2015, this is a colourful and vibrant blend with flavours from Southeast Asia

All shaken vigorously with ice and served over ice garnished with orchids and golden pineapple leaf.

Read more about the “Summer  of Colour” party back in 2015 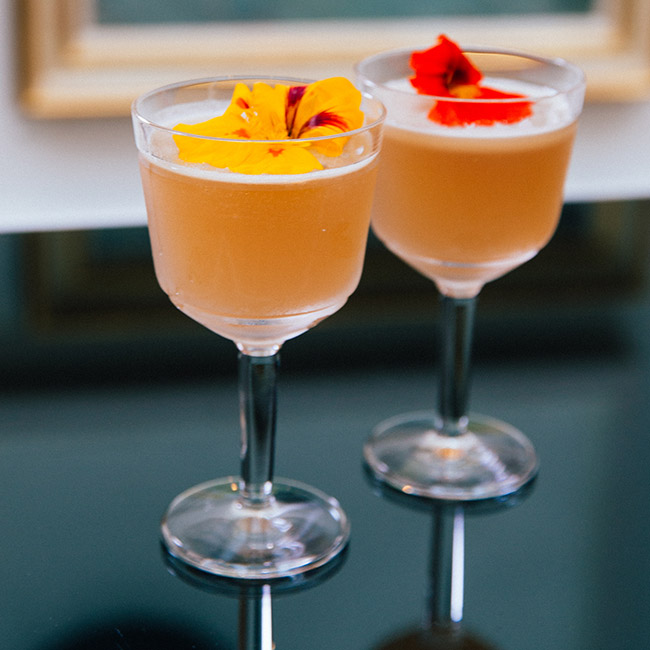 no 7: Apples & Peaches Punch (2016).
Art Deco – and the contrast of balmy days and crisp nights in Europe’s north

Late summer flavour of apples, peaches rhubarb and elderflower was the main characteristics of this tipple served at the 2016 party.

All shaken vigorously with ice and served over ice garnished with orchids and golden pineapple leaf. 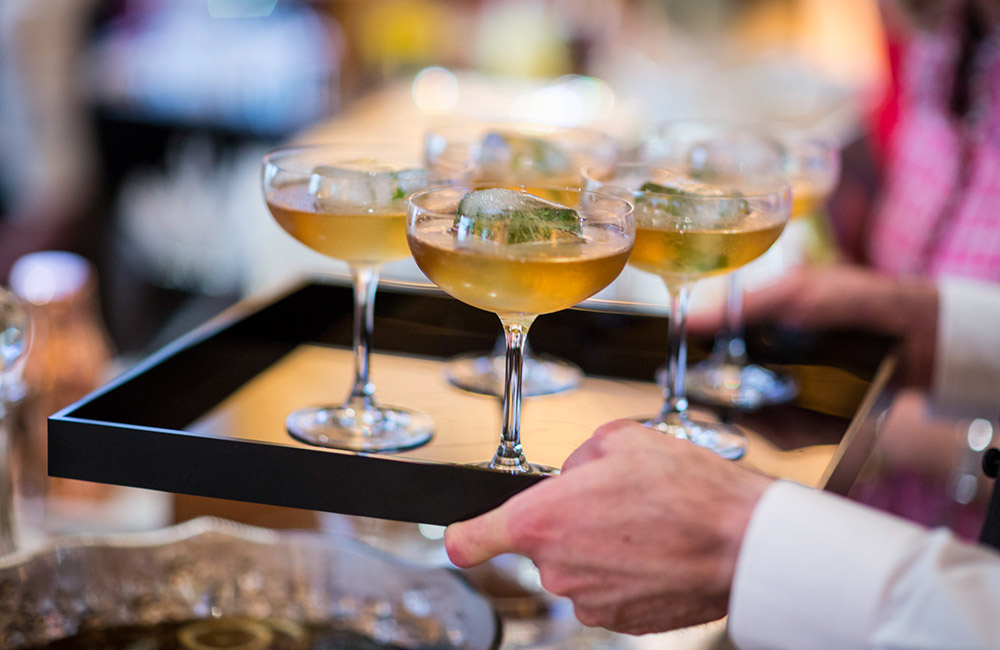 no 6: Italian Summer Punch (2016).
Art Deco – and the contrast of balmy days and crisp nights in Europe’s north

This take on a traditional wine punch was a real crowd pleaser, served up in the VIP bar back in 2016 over hand made botanical-infused ice

Dilute all in a punch bowl and serve over the botanical ice, add a drop of wine rose and lavender bitters 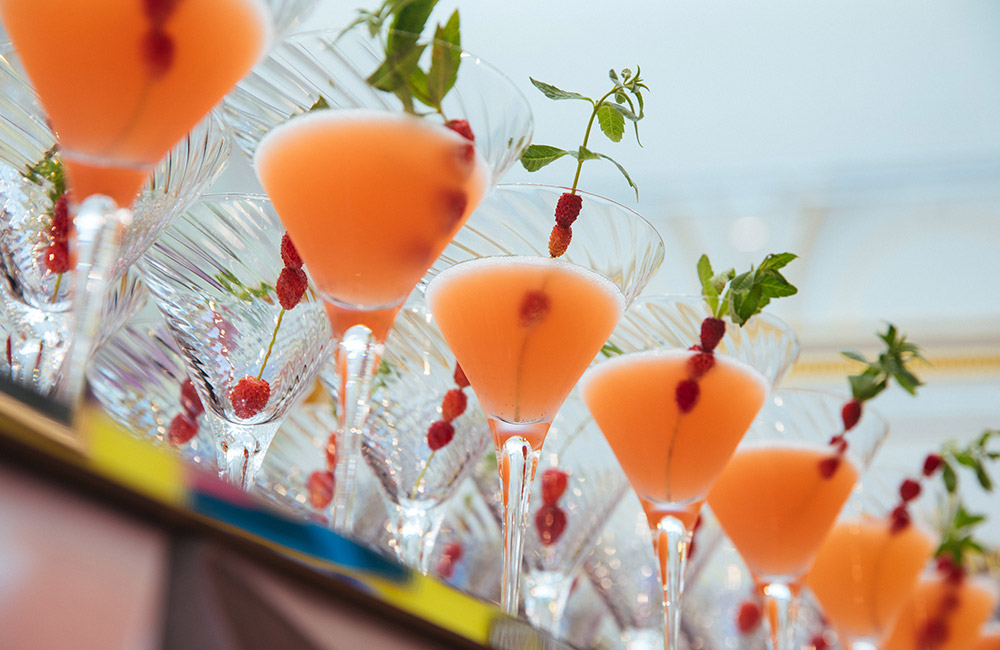 no 5: Smultron Blush (2018), the 250th anniversary.
Vibrant – drinks with a playful flair and craftsmanship

This drink served for the 250th anniversary of the RA back in 2018 really was summer in a glass, with “Smultron” being the Swedish word for wild strawberry. 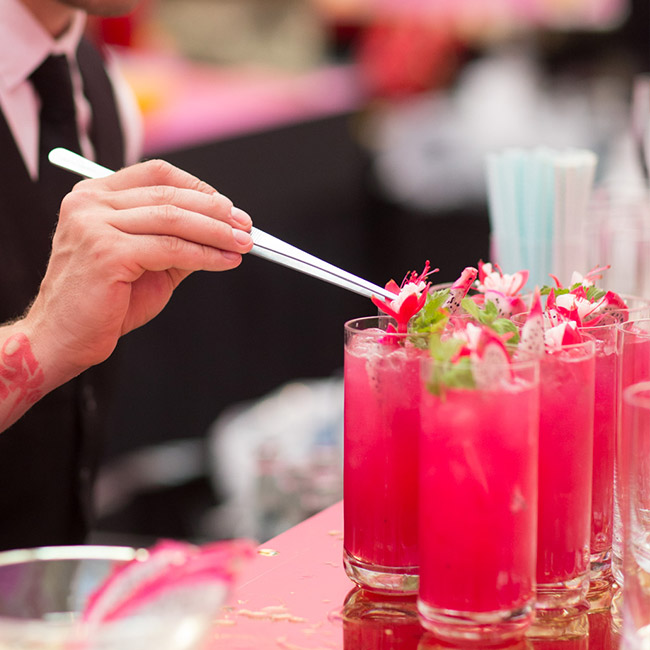 no 4: Prickly Pear Paloma (2015).
The Summer of Colour – with flavours of South America and Southeast Asia

Also created for the “Summer of Colour” theme in 2015, this is a colourful and powerful, yet refreshing blend of flavours from South America.

Aromatic foam: A blend of xanthan gum and high-foaming agent 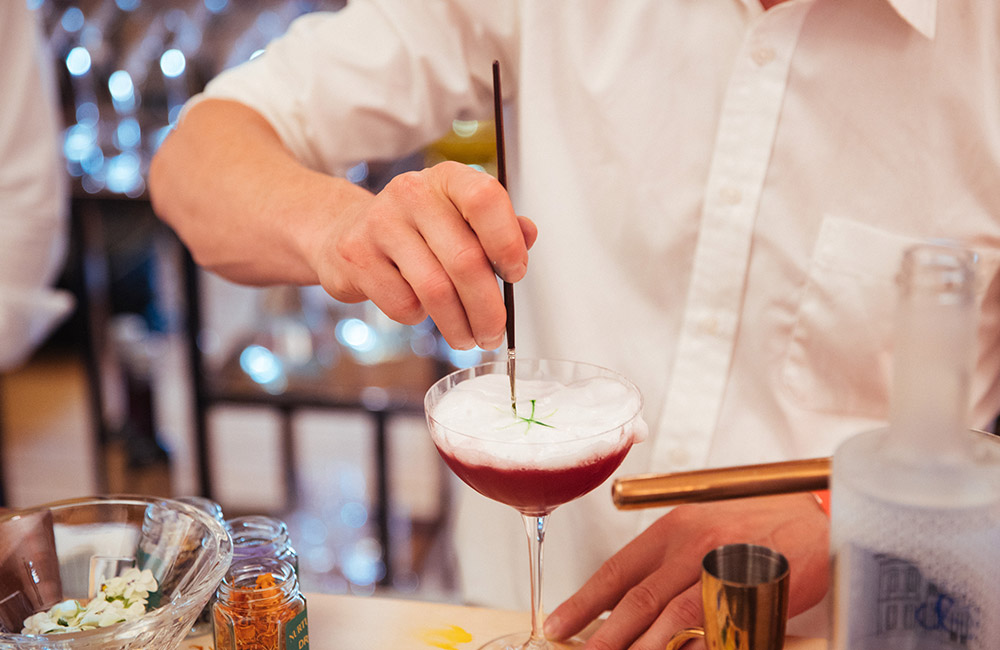 no 3: The Painters Tipple (2018), the 250th anniversary.
Vibrant – drinks with a playful flair and craftsmanship

Château de Laubade AOC blanche Armagnac and Floc de Gascogne shaken with fresh citrus and a hint of flure de figue from province and merlot syrup. Served straight up and garnished with a hand-painted aromatic foam.

Created for the  250th anniversary of the RA back in 2018 we really wanted to reflect the art element in drinks creation with this tipple. 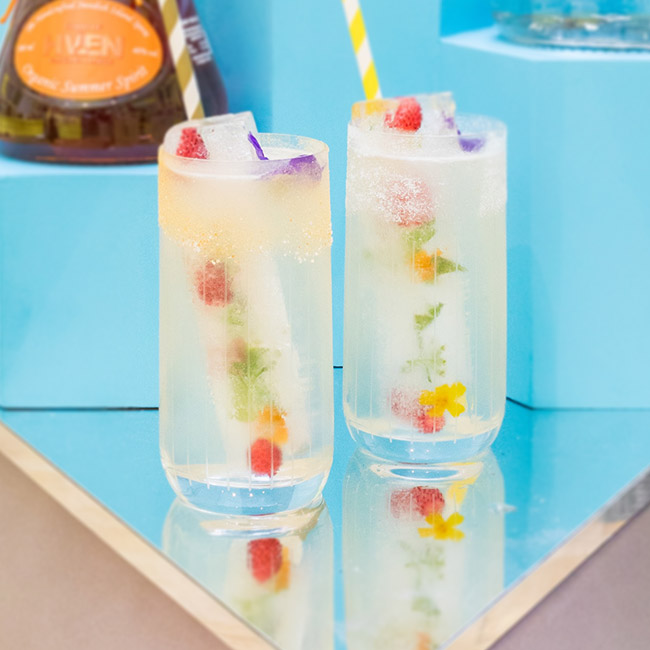 no 2: Colours of Summer (2018), the 250th anniversary.
Vibrant – drinks with a playful flair and craftsmanship

This drink really is all about celebrating summer, created for the 2018’s 250th anniversary of the RA, it’s striking with its colourful ice cubes, infused with British summer botanicals and wild strawberries. All completely visible due to the clarified juices.

All shaken vigorously and served long over ice

Clarification: Juices are clarified with agar-agar 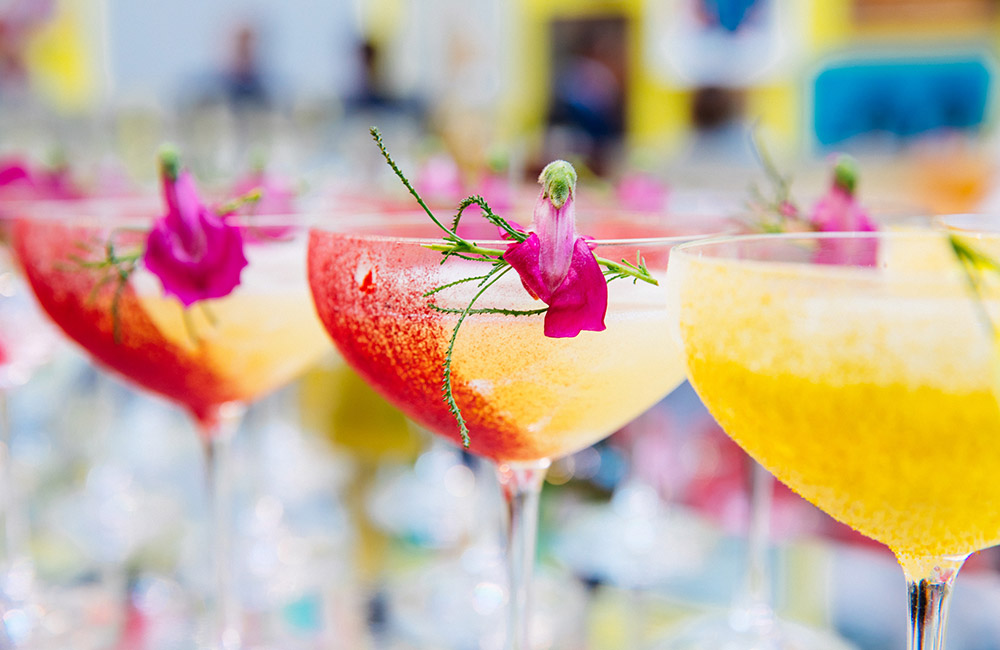 no 1: The Forager (2018), the 250th anniversary.
Vibrant – drinks with a playful flair and craftsmanship

A forage inspired tipple made of Hven organic gin shaken with Cálem white and dry port, Dolin Genepie liqueur pressed lemon and dandelion, sweetened with Borage honey, seasoned with tonic biters and fennel. Served straight up with a purple and gold beetroot dust.

All shaken vigorously with ice, serve straight up in a beetroot dusted glass.

Beetroot: dehydrated beetroot that is then pulverised
Syrup: mix three parts honey to one part water. Add dandelion to taste

Ten years of creating unique drinks for one of London most prestigious social events has been really inspiring, motivating and at points challenging!
It has given us a chance to progress as a business and also have a finger on the pulse of the global cocktail scene and its evolvement.  Choosing the ten favourite drinks has been difficult as there has been so many, and they all have had a place to fill each year, reflecting the Royal Academy’s concept.

I also like to say thanks to the fantastic partners we have worked alongside over the years, whether it be the stunning bars designed by Fisher Productions, the amazing food stations and canapes from Rocket Food and William Norris & Co and the great DJ’s and bands from Velvet Entertainment.

And most of all a big thanks to the Royal Academy of Arts Events Team!

We’re looking forward to working with you all on future projects!

Have a great summer!

We use cookies to ensure that we give you the best experience on our website. If you continue to use this site we will assume that you are happy with it.OkPrivacy policy